“To: Spy Mistress of the Nexus

Against my better judgement, I stayed my hand and merely observed the Crusaders in their activities. I arrived at the Monastery shortly after accepting my assignment, but found the place empty…save for a few Rot Brains. I figured the report was wrong, but decided to check around the Glades for any unusual activity before completely abandoning the claims. I stumbled upon a group of fourteen Crusaders, fighting Rotters by Stillwater Pond. It was unusual for them to be so close to Brill, but I did not alert any defensive forces. I sat and watched them for hours, and they steadily headed north up towards Agamand Mills. This is where they camped for the night. I overheard their commanders speak of reclaiming the Monastery, so I plotted out the tactical route that they would have to take in order to avoid detection. With their current numbers, I suspect reinforcements to reach Agamand Mills within the next day or two. Should we wish to avoid their plagued existence stinking up the Glades, I suggest immediate action. At the very least, I believe it a smart move to post men near Garren’s Haunt in order to track their movements. When the time is right, they will move along the coast if they are smart. We can set up a blockade around the uphill paths to the Monastery, and force them into an unfavorable position to which they would need to retreat from or die. That is all, you will find a map enclosed with this missive. Dark Lady watch over you. 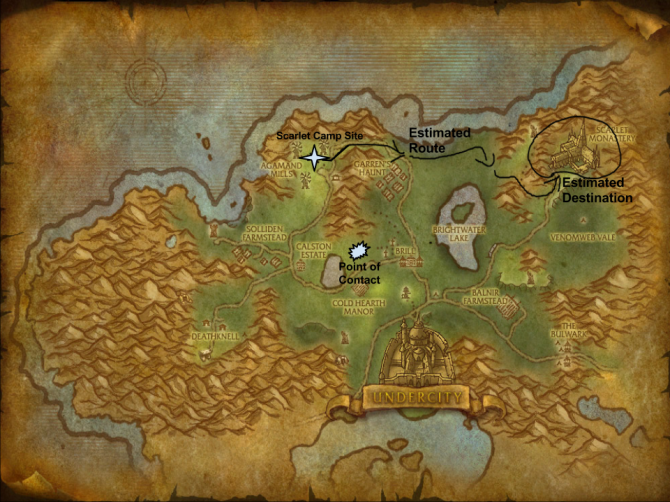