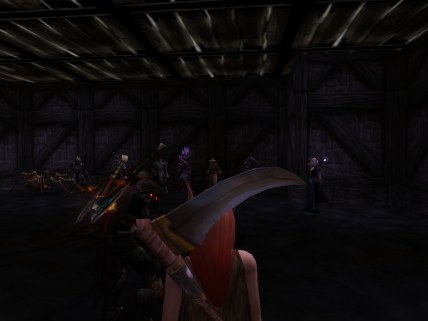 Deklavar and I did the best we could to subtly pull everyone in. I don’t know how this could have happened..

We made our summons to ruins near Deadwind Pass to those impacted by the traitor apprentice, all in order to give them our new intelligence: that this apprentice must be a false identity, for the real Hewick had been dead for some time. We told them that we suspected Thomas Oddfellow was either involved or in danger, due to his proximity to the situation. We told them of the plan to bait him with the temptation of a rare artifact, and corner him, trap him, in order to receive the answers we needed. But of course.. we were played as fools.

Just as intended, Thomas came to the bait, but Deklavar immediately knew something was wrong. He had but a few seconds to warn us, before the illusion of Thomas Oddfellow shattered and a damned Nathrezim stood in his place. He immediately opened assault, and in such close quarters, we were doomed. Those facing the dread lord did all that they could to damage him and weaken him, with Versiah attempting to cripple the monstrosity, and even with our friend Lexibella from Blackbriar throwing up ice barriers to prevent us from being knocked around so easily- but the creature was almost impervious. Our number was too few, and his power was too great.

External aid was called for, and while I struggled to get our team outside, we made a few last-ditch efforts to take down the creature. Felfire scorched us, shadows tore at our flesh. I am surprised those few living that attended were not more badly injured. Commander Bendricus even lost an arm in trying to escape, being the last out the door. We managed to trap the Nathrezim inside, before making it outside- just in time for the external aid (a mage named Farel Arc) to release the energy he’d been building from the local leyline nexus. Arcane tore through the ruins, and we heard the creature suffering inside.

But of course, it wasn’t dead. Moments later, severely damaged, its innards almost trailing out, the beast made one final effort in assaulting us. But this time, we were prepared. One after the other, we all made open assault to finish the dread lord off. The demon was slain, by the combined power of our team.. but it left us with a sour realization. We know that Thomas Oddfellow has not been a Nathrezim the entire time. One of two possibilities lay before us, as our team was healed by the initiate Rae.

One, Thomas Oddfellow had been captured and replaced by the Nathrezim when the cult realized we were getting too close, using Thomas’ communicator as a way to scry the rest of us. Afterall, a nethermancer and dreadmage would be very useful to a cult trying to bring the Legion to Azeroth.

Or two, Thomas Oddfellow was still yet involved, and very willing in this action, leaking information to the Legion in return for empowerment. There’s no way to tell for certain, but we’ve at least one certainty that lay before us: we need to find Thomas Oddfellow, and either rescue him, or destroy him.

Addn: Aelmus Deklavar is tracking Oddfellow’s communicator. We’ll have his location by dawn, and we will be able to scout the location before taking it by storm the following evening. I can only hope that our living allies still feel up to task.