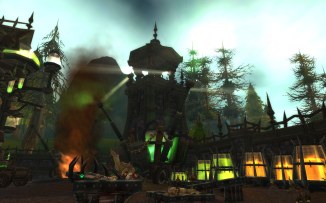 The Undercity Nexus is holding a screenshot competition! The prizes to be won are some awesome TCG loot cards, for more information please check out our guild forums at:
http://undercityrp.boards.net/

Under the contests heading!

The food was plenty, the drink was fine
They ate and drank and raised their steins
Bards did sing of a heroes shrine
As people cheered with each chorus line

Their walking staggered, their bellies clutched
At first they thought they ate too much
But soon they knew it wasn’t such
When some soon lost their sense of touch

An army stood at the gate
Led by a Prince adorned in silver plate
The people came, and cried for aid
But the Prince stood unswayed

The horrors were unveiled
As each child’s body was impaled
Choking on blood as they inhaled
Their lungs collapsing, oh so frail

White-washed walls now stained red
Streets lined with the malformed dead
Soldiers sheathed their weapons as they fled
“This is only the beginning,” their Prince said

For Stratholme, most dear
The remnants unclear
Now the Living are in fear
Of what they wish would disappear

With summer closing in another Site Write challenge begins!
This years prizes have a 40k value in gold, a pretty nice incentive to dust off the old short story skills and write up a few pieces for the month of June.

Deviantart is full of wonderful, talented and very polite artists. If you’re in the market for character art I would highly recommend checking out DancinFox.

They are the artist responsible for the displayed piece, they deliver stunning work and worth every commissioned penny.

“What does Faith mean to you and are you prepared to open your minds to what the Shadow is capable of offering you? There is great power on the horizon.”

What does Faith mean to you and what can the Shadow offer? It was a tense theme for this weekends guild event but the turn out and participation were excellent!

Featured photo consists of members of the Nexus and friends gathered for an after event screen shot.

The members of the Nexus met at Brill this evening to welcome a new corpse into the fold. The dead never sleep… and apparently neither do elves!

Drawing for practice, come get some free character art!
The attached photo is the style you will be receiving the art in. Whisper or mail Silaine in game!

The ground shook with the thundering of battle as monstrous masses marched through the rotted woodlands of the Silverpine Forest, slithering and stalking beneath the bowed branches of the hollowed trees. Each beat in step brought old music to the forests ears as leather straps creaked, mail leggings clashed and enormous shields were beat; the sounds of war once again rang throughout the dead lands of Lordaeron.

Withered flesh stretched over bone as knuckles were tightly clenched around the hilts of weapons, rage brewed beneath the putrid eyes of the weary Forsaken forces as the reality of war plagued their minds. The uncertainty of this night’s battle drifted throughout the air with an unparalleled tension; as each blackened boot hit the muddied ground the troop’s consciousness turned inwards with the unavoidable questions of the soul, were they marching to death and defeat?

The loss of both Tarren Mill and Ambermill left a foul taste in the mouth of the Horde and served as a reminder that not all borders can remain unbroken. The humiliating defeat at the hands of the Alliance crusaders caused this night’s victory to seem like nothing more than a far off dream lingering on the boundary of the horizon.

The headland of the Sepulcher had been reached and the caravan of soldiers gathered in the dimly lit square between the labyrinth of head stones; the divided Horde now banded together in response to the overwhelming threat the Alliance possessed.

“Sir, I have the enemy forces in sight,” a stranger’s voice on the comm-link rang out through the still camp, “they are on route to your location.” The ground shifted as each soldier took their weapon in to steady hands and marched towards the front line of the battle field. There was no grand speech, no motivating words of wisdom, only the promise of honor on the battlefield, live or die this was an assault that must be stopped.

“Battle if my calling, Death is my end,” a Forsaken priest began to speak, “I commend my blade to the Shadow of Faith. May I reap victory in It’s name, From the bodies of my enemies. May I offer the blood of my foe’s, to slake It’s endless thirst, May I die gloriously in the field, with It’s name on my lips.”

“Battle is my calling, Death is my end, May ascension be my reward.”

Citizens and soldiers of the Forsaken, on this eve we faced a battle with irreconcilable odds contrary to our favour, however, it is with great pride I am to report a victory for the Banshee Queen and the Horde.

It is in my belief that the Alliance crusaders who march under the banner of the false Queen wish to attack us at our weakest. We are divided within our allegiances but on this eve we must be grateful for the allies we do share within the Horde, for if it were not for their efforts upon the battle field we would surely be facing a more intimate threat at this present moment.

Despite this fortunate turn of events we must never forget the threat that surrounds us, let our losses at Tarren Mill be a reminder to us that our borders are not impenetrable, that as a force we are not unstoppable. Let this cold gripping reality be a reminder that we must grow stronger, as individuals, as an army, as a culture.

My brothers and sisters in Death, under the Shadow, the Alliance will not stop until they reclaim what they have ‘lost’.. But let us continue to remind them that these haunted woods and breathless lands belong to none other than the dead of Lordaeron, to the Forsaken.  We will not fall under the will of the living; we will not crawl from our home in the wake of their armies! Let us show those of the living that the dead keep what is theirs.

For each one of their soldiers that fall we gain a new so let them come with their war machines and their armies. We will crush all who oppose us.